I am a Synthetic Organic Chemist by training and have worked in various chemistry laboratories on the synthesis of chemical compounds from milligram to kilogram scale. Most of my time in laboratories would be spent working in front of a fume cupboard. In many laboratories, every chemist has their dedicated fume cupboard although these days it’s changing. The one in the picture belonged to me.

There are two types of fume cupboard - ducted (un-filtered) and re-circulating (filtered). In this blog, I present some basics about ducted fume cupboards, found in most high usage, hazardous material handling laboratories.

Fume cupboards are specially designed cabinets enclosed on 3 sides that are connected to ducted extracts, opening to the atmosphere. Any toxic, flammable and combustible substances are handled inside the fume cupboard to reduce risk and exposure to users, other lab members and the surrounding community. A typical fume cupboard will have a pull-down glass sash on the front (the 4th side) for opening and closing.

A fume cupboard is a containment device and works on the principle of drawing fresh air from the room and releasing the contaminated air into the atmosphere in highly diluted concentrations. The rooms where fume cupboards are installed need a constant supply of fresh air whilst in operation. Depending on the nature of chemicals and solvents handled, it can have a major impact on the laboratory ventilation design.

Special consideration needs to be given to the location of fume cupboards within a laboratory space; guidance is available in BS EN 14175. They should be sited away from doors and trafficked areas, and should not be located directly opposite laboratory benches which are in constant use. This is to prevent blocking exit routes should fire break out, or toxic materials be released, to avoid injury to people working close by & to reduce any air turbulence.

The speed at which air is drawn into the fume cupboard is called face velocity. The typical value is 0.3 to 0.5 fpm. If the face velocity is either too low or too high, it becomes ineffective and can cause contaminants to be released into the atmosphere. The extract fan should be located at the end of the stack to create negative pressure in the stack, maintain constant airflow and avoid releasing contaminated air back into the room. 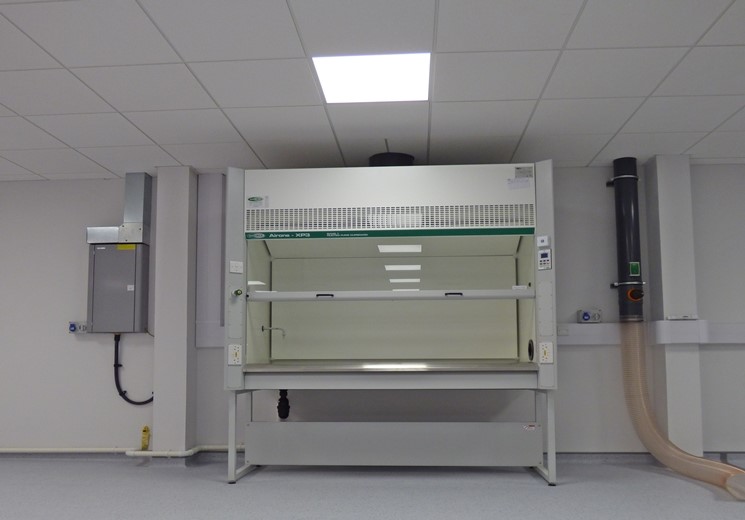 The exhaust stack opening outside should be 3m above the apex of the building. Attention should be paid to the wind direction in the area, as well as any neighbouring buildings, especially if close to a residential area.

Fume cupboards should be serviced and checked every 14 months by qualified ventilation engineers.

Contact us today to take your workplace to the next level with just the click of a button. Go ahead!

If you prefer fixed, robust benching or modular benching that offers flexibility and reconfiguration, our laboratory furniture manufacturers can deliver the perfect solution. 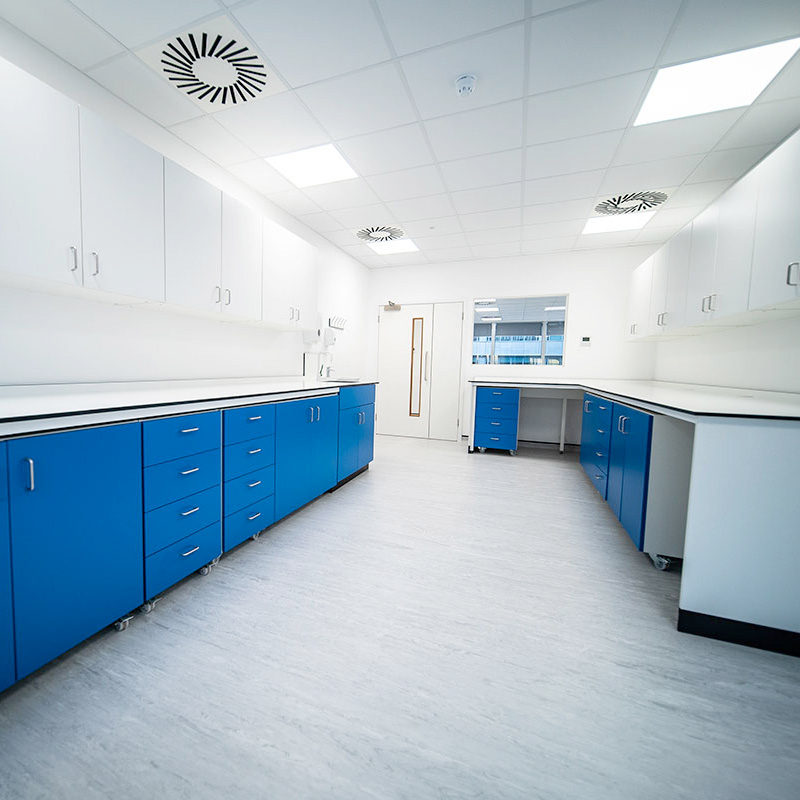 Depending on your research focus your worktop design requirements might change to allow:

Trespa Toplab Base is the industry favourite, but we can offer alternative worktops such as Corian, Stainless Steel, Epoxy Resin, Hardwood, Phenolic Resin to match your needs. 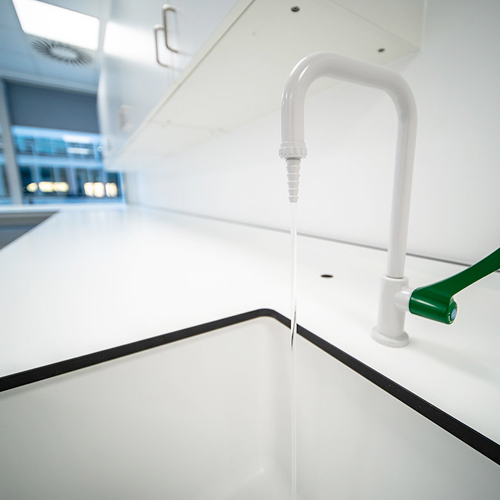 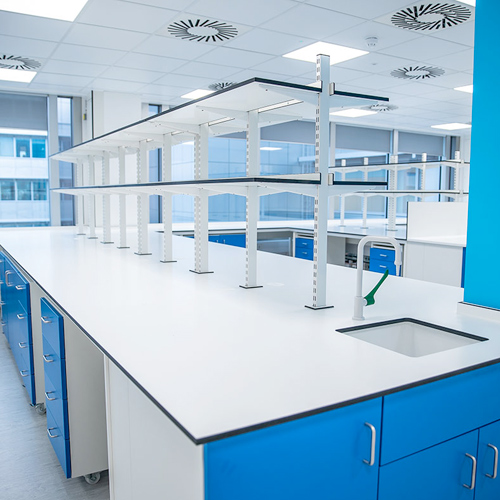 From ducted to portable ductless Fume Cupboards, our specialist and experienced partners are at hand to advise and install the right solution.

Unsure of what type to go for? Our lab furniture suppliers can help, just get in touch. 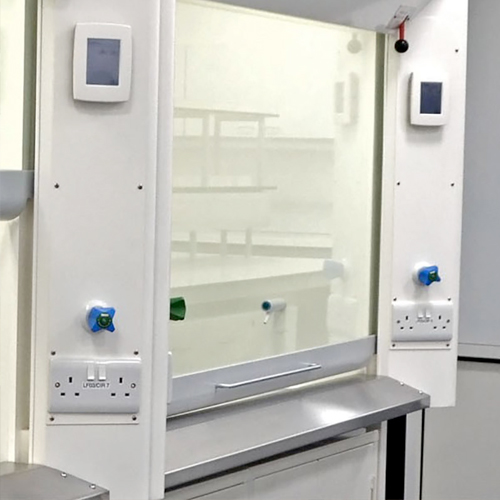 If you prefer fixed, robust benching or modular benching that offers flexibility and reconfiguration, our laboratory furniture manufacturers can deliver the perfect solution.

Whether you need Class I, II or III to handle Hazard Group 1 to 4 pathogens we can recommend suitable furniture suppliers. 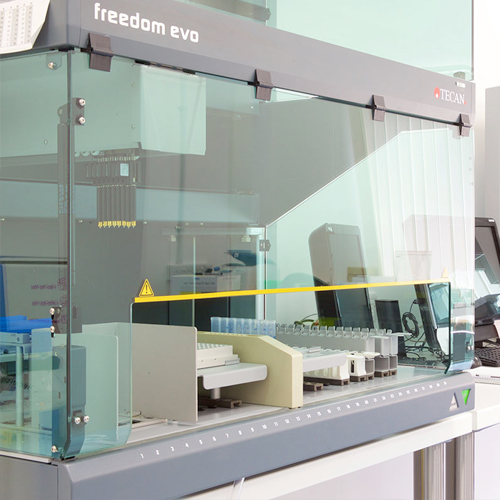 If you have any specific needs such as Cold Room or Clean Room installation services, Industrial Gases, Liquid Nitrogen, Non-ionising Radiation (LASER), Plumbing, Temperature & Humidity Control or other, we can help. 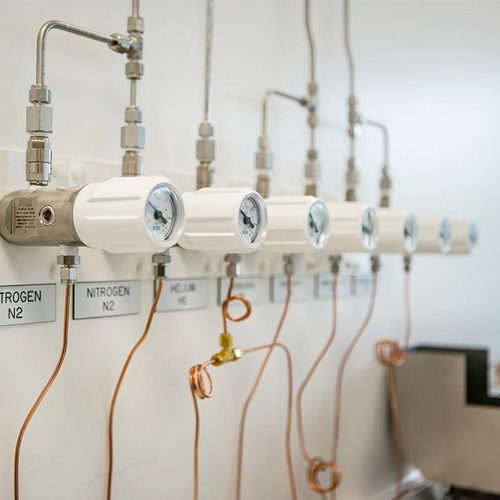